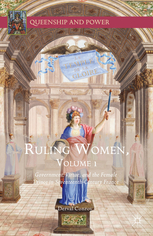 Government, Virtue, and the Female Prince in Seventeenth-Century France

Ruling Women is the first study of its kind devoted to an analysis of the debate concerning government by women in seventeenth-century France. Drawing on a wide range of political, feminist and dramatic texts, Conroy sets out to demonstrate that the dominant discourse which upholds patriarchy at the time is frequently in conflict with alternative discourses which frame gynæcocracy as a feasible, and laudable reality, and which reconfigure (wittingly or unwittingly) the normative paradigm of male authority. Central to the argument is an analysis of how the discourse which constructs government as a male prerogative quite simply implodes when juxtaposed with the traditional political discourse of virtue ethics. In Government, Virtue, and the Female Prince in Seventeenth-Century France, the first volume of the two-volume study, the author examines the dominant discourse which excludes women from political authority before turning to the configuration of women and rulership in the pro-woman and egalitarian discourses of the period. Highly readable and engaging, Conroy’s work will appeal to those interested in the history of women in political thought and the history of feminism, in addition to scholars of seventeenth-century literature and history of ideas.

‘Ruling Women offers a comprehensive account of early modern debates in favor of and in opposition to gynæcocracy, illuminatingly connecting them with more general discussions of princely virtue. With impressive scholarship […] it enriches our understanding of seventeenth-century debates and brings into focus important connections between the concepts of authority, power, and virtue, making an important addition to scholarly understanding of the history of gender equality.’

‘In this fascinating and original study, Conroy investigates the intellectual history of the exclusion of women from the French throne. She brilliantly shows how seventeenth-century feminist authors exposed the contradictions of their opponents and demonstrated that the intellectual and moral virtues required for governing were « of both sexes ». A must-read for everyone interested in the politics of gender.’

-Siep Stuurman, Professor Emeritus of the History of Ideas, Utrecht University, The Netherlands 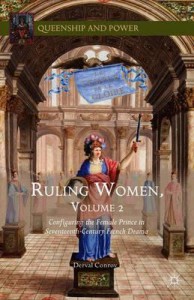 Ruling Women is a two-volume study devoted to an analysis of the conflicting discourses concerning government by women in seventeenth-century France. In this second volume, Configuring the Female Prince in Seventeenth-Century French Drama, Conroy analyzes over 30 plays published between 1637 and 1691, examining the range of constructions of queenship that are thrown into relief. The analysis focuses on the ways in which certain texts strive to manage the cultural anxiety produced by female rule and facilitate the diminution of the uneasy cultural reality it represents, while others dramatize the exercise of political virtue by women, explode the myth of gender-differentiated sexual ethics, and suggest alternative constructions of gender relations to those upheld by the normative discourses of sexual difference. The approach is underpinned by an understanding of theatre as fundamentally political, a cultural institution implicated in the maintenance of, and challenge to, societal power relations. Innovative and stimulating, Conroy’s work will appeal to scholars of seventeenth-century drama and history of ideas, in addition to those interested in the history of women in political thought and the history of feminism.

‘This study constitutes a giant step forward in the development of early modern sociocriticism, calling for a reappraisal of the relationship between gender and political thought, in the widest possible sense. With sustained scholarly rigor and impartiality, Conroy offers a nuanced view of female rulers on stage, combining theoretical literature with drama. Her work will revitalize the field in two directions, revising many long-held ideas on monarchy and enhancing further discoveries.’