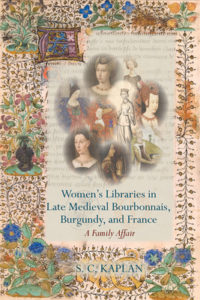 How were the libraries of aristocratic women in the late French-speaking Middle Ages developed? Which reading trends and topics were embraced by female readers of the fifteenth century? What substantial gaps in evidence and data loss impede our knowledge of medieval women’s libraries? Combining literary, historical, and cultural studies, Women’s Libraries in Late Medieval Bourbonnais, Burgundy, and France: A Family Affair addresses these questions in its examination of the wide cultural, literary, and familial webs influencing fifteenth-century high- and mid-level female aristocrats’ acquisition of books. It explores the roles of gifting and borrowing and reading trends in the formation of several generations of women’s libraries to demonstrate the integrally connected nature of literary culture at the various French-speaking courts. The book’s analysis clarifies the powerful role that women played in the formation of important intellectual edifices in French-speaking regions, demonstrating the impact of women on female and male literary culture.

S. C. Kaplan is a Lecturer of French at the University of California, Santa Barbara and co-creator of Mapping Women Book Owners in Francophone Europe: 1350-1550, https://booksofduchesses.com.