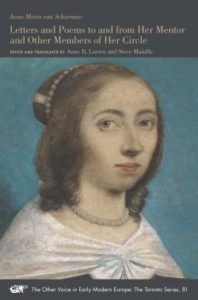 Anna Maria van Schurman was widely regarded as the most erudite woman in seventeenth-century Europe. As “the Star of Utrecht,” she was active in a network of learning that included the most renowned scholars of her time. Known for her extensive learning and her defense of the education of women, she was the first woman to sit in on lectures at a university in the Netherlands and to advocate that women be admitted into universities. She was proficient in fourteen languages, including Latin, Greek, Hebrew, Arabic, Syriac, Aramaic, Persian, Samaritan, and Ethiopian, as well as several vernacular European languages. This volume presents in translation a remarkable collection of her letters and poems—many of which were previously unpublished—that span almost four decades of her life, from 1631 to 1669.

“This volume of letters and poems, which comes at a propitious time in Anna Maria van Schurman scholarship, is far more inclusive than anything I have seen, and will interest a potentially large audience of knowledgeable readers. The letters included here, in superior translations, display the art of letter writing in all its facets and possibilities, trace the continued exchange of ideas with members of van Schurman’s circle, and exemplify the scholarly debates of the seventeenth century, with a woman as one of the debaters.”
– Cornelia Niekus Moore, University of Hawaii

ANNE R. LARSEN is professor emerita of French and senior research professor at Hope College in Holland, Michigan. She is the author of Anna Maria van Schurman, “The Star of Utrecht”: The Educational Vision and Reception of a Savante.

STEVE MAIULLO is Associate Professor of Classics at Hope College. He teaches Latin and Greek language and literature and is the author of articles on Plato and the teaching of Latin and Greek.