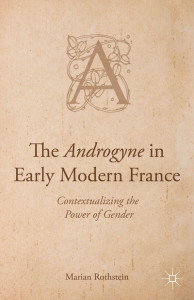 In the Renaissance, the androygyne – based on sources in the book of Genesis and Plato’s Symposium – was a means of expressing the full potential of humans made in the image of God. Discussing the androygyne within the context of the visual, literary, and political, this book explores the androgyne as it was understood in early modern France. More specifically, Rothstein documents the wide-ranging uses of the androgyne in the thought of poets, philosophers, courtiers, and women in positions of political power and its ultimate connection to gender construction during the European Renaissance. As the book moves from examining the sources of the androgyne to increasingly contextualized instances of their use, Rothstein highlights specific manifestations of the androgyne as a powerful yet enigmatic literary metaphor and an instrument of action in the world.

« Rothstein has written a masterful pre-history of the woman sovereign who could also act as a man by tracing the enabling figure of the classical and biblical androgyne through multiple strands of Renaissance culture. A magnificent feat of sleuthing that uncovers unsuspected wealth behind a recurring motif, this work tackles a real problem and makes a much-needed intervention in the topic of early modern gender. Written in confident and elegant prose, and laced with touches of wry humor, her book beautifully demonstrates how the Greek and Christian traditions continued to pollinate each other to create a surprising potential for action in the early modern world. »

« The Androgyne in Early Modern France is a fascinating, erudite, and engagingly written study of the hermaphrodite’s more fortunate twin. Rothstein elucidates with acumen the figure’s origins in Classical and Jewish sources and offers a compelling demonstration of the range and importance of the artistic, literary, and political ends to which it was deployed in the French Renaissance. »

This price is available to individuals only. This offer is not available to our trade and library customers. Offer only valid outside Australasia & Canada. Orders must be placed direct with Palgrave Macmillan.

To order your copy at this special price, visit www.palgrave.com and quote discount code PM15THIRTY