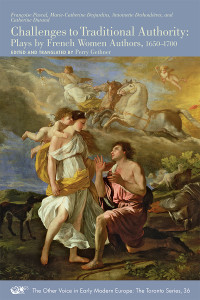 The Other Voice in Early Modern Europe – The Toronto Series, Vol. 36
2015, 320 p., ISBN 978-0-86698-530-7, $34.95
The second half of the seventeenth century marked the first major breakthrough for women playwrights in France, as some of them succeeded in getting their works staged, published and taken seriously by critics and authority figures. The four works included here, translated into English for the first time, represent the diversity of genres cultivated by these writers, while reflecting both the cultural milieu of the era and a concern for the status of women. Françoise Pascal’s Endymion, a tragicomedy with special effects, daringly reexamines a classical myth. Marie-Catherine Desjardins’s Nitetis, a historical tragedy, focuses on the plight of a virtuous and astute queen married to an evil tyrant. Antoinette Deshoulières’sGenseric, also a historical tragedy, rejects prevailing models of male heroism and of conventional tragic plots. Catherine Durand’s proverb comedies contain a scathing critique of aristocratic mores and give voice to women’s desires for emancipation.
Commander / Purchase