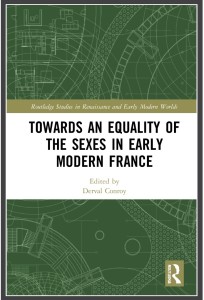 This volume sets out to examine the ways in which an equality between the sexes is constructed, conceptualised, imagined or realised in early modern France, a period and a country which produced some of the earliest theorisations on equality. In so doing, it aims to contribute towards the development of the history of equality as an intellectual category within the history of political thought, and to situate “the woman question” within that history. The eleven chapters in the volume span the fields of political theory, philosophy, literature, history and history of ideas, bringing together literary scholars, historians, philosophers and scholars of political thought, and examining an extensive range of primary sources. Whilst most of the chapters focus on the conceptualisation of a moral, metaphysical or intellectual equality between the sexes, space is also given to concrete examples of a de facto gender equality in operation. The volume is aimed at scholars and graduate students of political thought, history of philosophy, women’s history and gender studies alike. It aims to throw light on the history of Western ideas of equality and difference, questions which continue to preoccupy cultural historians, philosophers, political theorists and feminist critics.

1. “Poulain de la Barre, a logician of equality: prejudice time and the sex of the mind”

4. “The rhetoric of equality: Marie de Gournay, linguist and philosopher”

5. “Virtue as a language of equality: gender, moral androgyny and the representation of archduchess Isabella Clara Eugenia in seventeenth-century France”

6. “Reading, acting and writing into being: Ursulines as Jesuitesses in the French Atlantic world”

9. “Gender equality and the role of women theatre professionals in late seventeenth- and early eighteenth-century France”

10. “Equality in the printed book: the case of book privileges in France in the seventeenth century”

11. “The destabilization of gender in the European Enlightenment and Qing China”